Feyria is one of the surviving women in Reiko-10.  She is fast, flirty, and skilled at piloting.  Her aggressive flirtations are very polarizing, but her ability with vehicles is nearly unrivaled. 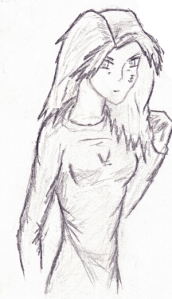 Background:  Feyria was the girl everyone wanted on his or her team.  She was smart, pretty, popular, and, perhaps the thing she took the most pride in, amazingly athletic.  The former traits were things she could care less about; it was her skills she cared most about and consequently spent time honing.  Predictably, it was physical training class that she loved the most.  She could run down any man, and in games like Rollerbrawl and Slipshow her reflexes made her nearly unbeatable.  Before her classmates decided to just keep her as a captain for any games they play it was suggested that if you picked her (which was always first) the other team was compensated by being bale to pick two people in a row to make up for it.  She just smiled, it was simply a matter of course.

Becoming a pilot was the natural thing for her to do.   As they say “it is in her genes”, as she was engineered exactly to be that.  She was programmed with a desire for danger and a love of surviving through her own skills, so with these it seemed in her mind the most challenging and natural thing she could do.  It would test both her mind and body to their limits, which is exactly what she wanted.  In her wake, she left a multitude of broken male hearts and jealous, but outclassed, female competition.  Experience as a hot shot pilot has kept her sharp, and if anything has enhanced that one thing she had never given up as it has provided her life with endless amusement: her wild streak.

Personality:  It’s hard to not notice Feyria if you are anywhere within the near vicinity to her.  She is loud and boisterous, fun and energizing; you just don’t feel like sitting still when she has so much to say and going on.   The proverbial ‘life of the party’ is probably more accurately restated as ‘Feyria is the party’.

She has no compunction about flirting with even the most chaste, already-committed males, much to the chagrin of any female companion, and the deep distraction of any male caught by her seemingly-undivided attention.  Though this often gets her in trouble, the truth of the whole matter is, as powerful and noticeable she is, she does all this more for a sense of fun in her own mind than any reward or status she might be seeking.  She honestly wants nothing more than everyone around her to succeed (or at least the cute guys!) and could not stand the thought of ever having hurt or killed somebody because of her strong personality or lack of ability.

Her extreme agility lends itself surprising well to combat, she was very good at games like variations of dodgeball.