The major book that this site is based on, it asks the fundamental question that if you could change your fate or reality, at what cost would you do it?  The life we live – it is of our own creation, and how could it have been different?  Evoking many philosophic questions of history, is what we see truly reality?

It follows three different groups in a sprawling space epic that takes place against interstellar war as individuals find out they can locally change reality.  The firs book introduces a huge number of concepts, ranging from the skilled, intelligent Aelisha race, to the melee-focused combat everyone must now engage in.  The Burn begin a huge assault across thousands of stars as billions are killed.  Among this backgroup the individual-focused tale follows groups trying to survive and slowly becoming aware that reality might be more malleable than they think, but first they have to survive.

The first group is lead by Gauge who has a small group of people that are wanted for stealing a ship, when Gauge starts finding out an object he just acquired is able to change fate, things he thought he knew is called into question.  Havok is a sniper from a abandoned military unit that falls in with the Aelisha Ran who is interested in having these objects for herself and doesn’t not care who she has to kill to get them; whereas he is fatalistic and merely wants to live.  Lastly is Leiger who is from an ancient warrior clan who’s unknown mission brings him in direct contact with the largest forces in the universe, and the spirits he talks with may have a far more disturbing explanation.

The book can be read as an action sci-fi book but there is much more philosophy and answers of deep existential questions that have plagued men for generations.

Here is a cover art drawn by a fan: 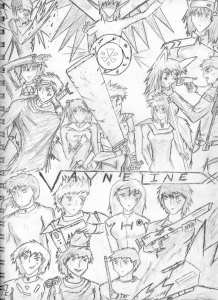 The inspiration for VayneLine came from a long involved dream