Zaier is one of the major male characters in Reiko-10, he is the base commander, the highest ranked individual.  A majority of the officers had disappeared at the start of the story, leaving him mostly isolated in this regard. 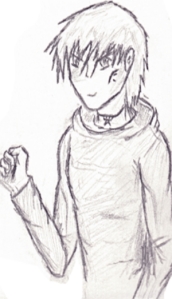 Zaier’s real name was Valent and was trained as a special combat intelligence officer.  His intelligence and firm grasp on reality was unparalleled and he quickly found his way into the more secretive operations.  Valent was hardly among the strongest of his unit, but one thing set him apart from the others; his accuracy and focus was so good, any physical shortcomings were easily overlooked.  He was a natural leader, in the sense that he got things done and people followed him out of his skill more so than any charisma he lacked.

Once, they brought him a strange girl to his unit for training.  She was exceedingly odd in her perpetual silence and her sad eyes that seemed to pierce through any problems Valent’s own soul might have contained.  Zaier’s anger at such a useless addition to his unit was quickly put to rest when he saw the amazing ability the girl possessed with rifles.  He wondered why he had not seen it earlier.  Her quiet, patient demeanor perfectly suited the role of the lonely sniper.

They immediately had an attraction towards each other.  They were both physically attractive, and perhaps more importantly, both very good shots.  It was a strange relationship to anyone outside of it; Valent rarely talked, and the girl who had been assigned the name Suzene (it was the first alphabetical name of a recent female casualty, so in effect she had ‘replaced’ the former woman) never talked.

The last night the two of them were ever together, Valant brought the girl to a high set of cliffs so they could see the moon rise.  He was surprised to see the expressionless girl softly cry as they sat together on a high cliff he had brought her to.

The woman he had liked in such a strange way so long ago had handed him a strange necklace she had always worn before that, telling him to simply ‘remember’.  To the man that would eventually have slight facial reconstruction and assigned a new name Zaier, it was over stated.  He would never forget that girl.  He always felt guilty that she gave him such a valuable gift, and all he could give to her was the name of the song she seemed to like when he had it playing.  He wore Suzene’s necklace from that fateful day onward.

Personality:  A cold, calculating individual who seems to lack any sort of emotion bordering anywhere near love or desire.  The truth is Zaier actually is rather cold, but he has a deep heart that has not been touched in a long time except for a strange girl he had known in his past.

Zaier is extremely direct, and has no sense of tact when he tells others how much of a failure they are.  Still, when one is not under Zaier’s scrutiny, they can’t help but feel inspired to a level greater then they could normally achieve otherwise.  He is so focused and imperturbable that an ability to better focus on combat naturally radiates to those around him.

As cold and mission-focused as he is, he can’t help but feel a strange attraction to a woman named Aria.  Logically, he knows it is just his emotions and his heart that sees so many similarities between this girl and one he had known in his past.  He tries to stop his mind from coloring one woman’s characteristics with one he had liked so much when he was younger.  If anything, he is a touch harder on Aria than anyone else for her similarities to Suzene.  Most likely it is a defense against his deep-felt pain over a girl he had liked so much but let slip from his grasp.

Aria – Lover in past, isn’t aware of now

His extreme mental abilities have the effect of making him seem much more physical tough than he might be on his own.