But in a way, I was in a game that had a set boundary specifically tied to the time limit.  This made it hard, as I could not do ‘anything’ as there simply was not enough time in this singular day.  Was it even possible to pull off whatever Proud thought needed to be done?  So my options were not limitless, as there was a practical distance I could travel before my ‘time was up’ so to say.

With those thoughts, a huge wave of experiences came flooding over me.  My eyes started watering and I fell backwards.  My eyes zoomed outwards as I fell out of my body.  The simple act of me sitting in my room faded away to nothingness as so much blanketed my mind.

This was not the fourth; this was not even the tenth, even a hundred would be low!  I had been though thousands.  All the experiences came flooding back.  All the cycles lived, and then died.

“Shit…”  I said, holding my head as I rolled down to the floor, my mind hurting so bad with this new awakening.

First were endless denials out of me, the ‘no way this is happening’ of thinking each cycle literally was new, and I had just been dreaming.  Hell, even the last couple of times I thought it was just a dream and I had already been looping thousands of times.

I could see why Proud made a comment about annoyance or something along those lines.  It was frustrating seeing myself constantly deny what was actually happening.  I was trying to ignore the important events like the guy at the fence, the android girl at the spaceport, and the whole bar scene or talking with Proud.  Even though little things like my banter with the android girl, or me gunning that guy down rather skillfully were a bit beyond my normal ability.  With grim realization it was probably hundreds of repetitions that had improved me.

My hand found something, maybe the leg of a desk, and I held on tightly like a sick child.  Even my most recent memories I was not sure had actually recently occurred.  I talked about winning against that guy, but if I had looped so often, I never would have got shot, or avoided it all together.  Thinking about it this way, I felt that there actually was a far deeper well of combat prowess inside me than I currently appreciated.  Honed over thousands of random battles.

The more my head swam, the more I realized how far down the line I was in regards to loops.  The denials lasted forever, but gave way to sadness before darkness.

When I started realizing I was looping, it was perfect to learn about people.  There were women I could get close with and my loneliness faded away for the cycle.  I had met a lot of girls and felt so close to many of them.  But each reset I was greeted with words that cut into my heart deeper and deeper each time hearing them: ‘who are you?’

Nothing that I had done with them remained.  No clever date, no laughs we shared, no talks about our past.  I would remember vague things about them, but no one else perceived the loop, I was just as unknown the hundredth time talking to them, as the first.  The closeness I thought I had with them was an illusion.  It was only in my mind.  That sent me down a dark road as I no longer had this to comfort me given the end I experience without fail.

The terror of dying every cycle started grinding on me until the desperation reached a breaking point.  I started trying to kill myself out of this nightmare, thinking that this simply wasn’t real.  If it was, I would rather be dead than be trapped in this fearful world where nothing I did mattered.  And it ended in absolute pain every single time.

Sitting here huddled on the floor, crying while this multitude of memories flooding back was not fun.  I wondered if every time was like this.  Probably.

The desperate loops were short lived, and then it became rampant hedonism and dark experiences.  When I realized I would indeed be reborn each cycle anew my curiosity took a dark turn.  How many people could I kill before I was stopped?  How many girls could I get within a single cycle knowing the perfect things to say to them from thousands of scripted conversations I had tried?

Been updating the site a lot lately while using tons of time to get my stories out.  If you are new here feel free to read any of the links or send me an email at vayneline@mail.com

Fraylash is a story about a man hunting a girl who has killed everyone before him.

EuKnight cover, here is the link to Amazon

EuKnight is a story about two knights that are attacked by enemies from the stars.

I have done a lot of some major entries like Aelisha, and the Strive section, good reading!

Hey guys, its been so busy lately.  I know I have zero or near zero readers right now, but that’s ok, I’m being carried by my passion!  AilAid has been out for a few days, and that one came together pretty well.  For new readers, I have all of the VL chronicles done already, it is simply getting them edited a final time and uploaded. So expect something like a new book every 2-3 weeks realistically.

Again, feel free to email or post.  If I don’t get back right away, its because at this point I don’t check much, but will definitely write back.

Big updates on the site are getting all of the AilAid entries squared away right now.

This is a pretty big step, finally got two books on amazon, Slipdrift and Project: AKRA I can’t believe how much work it takes for everything to actually look good.  Format issues, cover issues, linking this with that…

But I am really happy I finally did it!  Here is the humble beginnings… 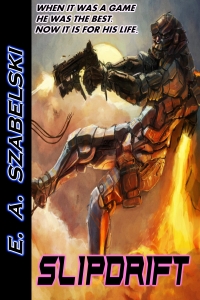 Hi, so this is my first post, and I am going to be much more informal here than the rest of the site, more of a place to cut loose!  Also, this is open for comments, anything from the stories, to the site or anything in between.

For the last month everything has been crazy, getting the website set up on my own, figuring out what to do with amazon/kindle.  As of right now I am still putting together covers for SlipDrift and Project:AKRA which are going to be the first stories launched into the breech.

For any readers curious, at this stage most of the VL chronicles are done and need one final edit before cover/available.  VayneLine is in a final edit, mainly for content but won’t be done at least for a bit, and Reiko-10 is still in its infancy, but within a few months will be ready.

I hope you enjoy the site, and I will respond to all comments.

Welcome to VayneLine, this site is dedicated to providing information of all the stories. This ranges from summaries to bonus info.

Enjoy the site, explore and feel free to contact me by email at vayneline@mail.com for questions or comments.

This page is made entirely by me, so if there are any issues it is my own fault and I am trying to expand and update it as much as possible.