Arianna, or her official title ‘Star Priestess Arianna’, is a well known and respected philanthropist within the Aelisha‘s Star Priestess group.  She is kind, attractive and possesses an intellect rarely shown.  Her appearance is notable due to her reflective silver hair, and her deep blue eyes. 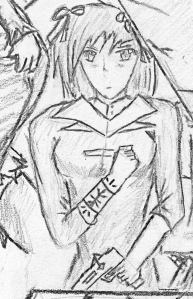 A quick sketch of Priestess Arianna, a major character in VayneLine. She has her bangle on her right hand, and lacks a facial Strive

She becomes involved with Gauge at some previous point during VayneLine when she feels a calling that they share a destiny together.  In many ways what evolves can be interpreted to border on manipulation.  Arianna, like all Star Priestesses, has very strong Psionics, but rarely shows or talks about them.

Arianna is intensely spiritual and uses a very formal manner of speech.  Despite being nice, her devotion can rub some people the wrong way such as Reno who they do not get along at all.  A major source of this is her desire to legitimately wanting to ‘save’ the person, but her intensity can sometimes be over bearing.

Throughout VayneLine Arianna tries to drive at some goal that she never states but quite clearly is gunning for.  There is a lot of evidence that machinations behind the scenes are due to Arianna’s interference to some degree.  Overtly, she gives Gauge what is a ‘Line Artifact’ which causes many important events to follow.

Like all SPs, she does not have a Strive on her face but does have a Priestess bangle and the arm tattoo.  It is not clear if she originally had a Strive, as she came from a non-Affiliated, fringe colony.

She demonstrates an ability to fight on occasion which goes against the ‘peaceful’ image of the Star Priestesses.  This more clearly indicates a ‘special operations’ type feel to the group, despite Arianna claiming it is merely for defense.

Her main weapon is a small pistol called a ‘neural eraser’ which temporarily or permanently destroys someone’s memory.  After a fight the person would be taken in for rehabilitation – of which is unknown what this includes.

Arianna occasionally gambles, this surprises Gauge, but she does it mostly out of wanting to bond.

Arianna speaks a rare language due to her distant colony she is from.  Given nanite translation this is not a problem

She is from a very poor colony, so despite her regal status, she came from very modest backgrounds.