Railith is a major character in the story Eu-Knight, she is one of the last Knights along with Dirx who serve Princess Higarth. 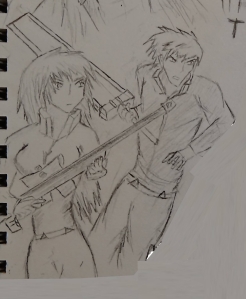 She is a tall, quiet woman with long black hair.  She is very diplomatic and constantly gets Dirx out of trouble.  They have been partners for a long time and she likes him more than a friend.  They grew up together in the holy weapon Knights under Higarth.  Although they can use all the weapons, she prefers longer rifles and is a deadly shot with her holy Fan-Faili.

She really liked their mentor Pilko, and viewed him much like a father.  When he died in a recent conflict she took it very hard.  Their rank’s have been thinned down to just the two of them.  They are constantly attacked from enemies ‘from the sky’.  Dirx believes what they were taught that the lights in the sky were large holes in the roof, but Railith thinks there is something else to it.

Railith and Dirx have fought together for a long time.  Given he prefers melee and she prefers rifles, the major style they embrace is that she will engage the enemies at long range and often kill most of them.  If they possess strong ‘auras’ (combat shields) she keeps them engaged until Dirx can close with his Fan-Fanir which will break the ‘auras’ of the enemy mages.

She is very good at ranges, and often has killed enemies by shooting through buildings or other obstacles.

During Eu-Knight she is confused by many things that are revealed.  First, the fact the her mentor Pilko has a hidden area in his house with advanced technology along with a note to her.  At Princess Giland’s kingdom they are surprised by how different it is from what Pilko told them it would be like. Further she is confused by what Giland tells them that it is Higarth that has caused this.

Back at their home, they are under attack by multiple forces and things Railith believes is called into question on who to fight for.

She is tall for a female, nearly as tall as Dirx.

She used to cook a lot for Dirx as an attempt to make him like her, but he largely did not understand she was flirting with him.

Fan-Faili is actually a pretty standard Slivershot rifle but in the time period, is a vastly over-powered weapon.

Railith is revealed to be an agent from an advanced alien race that was planted there to watch the Line Artifacts that the two wayward Star Priestess ‘princesses’ had taken and started their own civilization.  Railith is skilled largely due to her racial ability, but is not trained in ‘combat’ as much as other in her race as she is only an intelligence agent, thus why a combat-oriented Star Priestess like Higarth could beat her.